As the pound edges up in value against the US dollar after a year in the doldrums, Christmas shoppers on a city break can save hundreds of pounds on a money-saving shopping spree if they swap London for New York or Boston.

The sixth annual Post Office Travel Money Christmas Shopping Guide, produced jointly with Virgin Holidays for the first time, reveals that US stores have pegged their prices at 2012 levels to undercut London and offer thrifty shoppers savings of up to 50 per cent.

From over 100 items surveyed by the Post Office in London and by Virgin Holidays in New York and Boston, the best bargains are on jeans and US designer label clothes1. Boston remains cheaper than New York because of lower sales tax and higher tax exemption rates. However, savings of over a third are commonplace in both cities and shoppers can shave 50 per cent off the London cost of a Polo Ralph Lauren gilet (£295 compared with £146.61).

In more good news for UK holiday-shoppers, sterling is now worth eight per cent more than at its 2013 low spot in July, which means that the same items will cost less in the USA than in the summer – over £10 less in the case of the Polo Ralph Lauren gilet.

The survey reveals that leading brands of jeans like 7 For All Mankind, Hollister, Levi’s and J Brand cost over 40 per cent less Stateside – with the top bargain on women’s J Brand jeans. At under £130, these are almost half the £250 London price tag.

Hip labels Abercrombie & Fitch and Rag & Bone are among several sought-after fashion names that offer substantial discounts in the USA. A&F’s Abercrombie Hot cologne costs over £20 less (36 per cent) than in London - £58 compared with under £37. And there are even bigger savings on Rag & Bone, whose ‘Elsa’ dress costs 42 per cent less in the USA - priced at around £181 in the US compared with £310 in a London department store.

While savings on the latest electronic gadgets are lower, most are priced at 18-26 per cent below London levels. The latest Apple iPad mini WiFi costs £204.17 in Boston and £209.21 in New York - 16-18 per cent less than the £249 London store price. The new Kindle Paperwhite WiFi eReader is the best buy gadget, priced at 24-26 per cent less in New York and Boston than in London (see Best Buys table).

Using the £390 duty free allowance in New York, Post Office Travel Money was able to compile a list of 10 ‘must-have’ gift items for family members saving a third on London prices. In addition to Hollister jeans and high fashion Abercrombie & Fitch and Marc Jacobs items, this included make-up, skincare, fragrance, electronic gadgets and toys, the latter chosen from the Toy Retailers’ Association ‘Top Toys’. The biggest savings were on Elizabeth Arden’s Eight Hour Cream (45 per cent) and a child’s InnoTab 35 tablet (44 per cent).

Andrew Brown of Post Office Travel Money said: “With sterling’s recent recovery against the US dollar, there are great bargains to be struck in US shops but it’s still important to do your homework before parting with cash. We are always looking for ways to make life easier for our customers at Christmas and as shopping can prove quite stressful our new guide can not only help people get the best value but also give good advice. Shoppers planning transatlantic trips can compare prices in London, New York and Boston at postoffice.co.uk/shoppingguide2013 to find out which gifts carry the biggest savings and which might prove costly mishaps.”

While most of the items researched were cheaper in the USA, shoppers should beware buying British brands like Ted Baker and Burberry or they could pay well over the odds. For example, a Ted Baker ‘Evvie’ dress in New York was found to cost 38 per cent more than in London (£205.70 compared with £149.00 in London).

Similarly, while some fragrance, make-up and skincare brands like Benefit, Clinique and Elizabeth Arden are cheaper Stateside, shoppers can expect to pay as much as 28 per cent more if they buy French brands like Guerlain and Clarins in the States.

Andrew Brown said: “Make the most of the improving exchange rate by getting the best US dollar rate before leaving home. Take enough cash to cover both shopping and living costs and be aware that transactions of over £500 will attract a better rate in our branches or on the Post Office website. A good way to avoid exceeding the £390 duty free allowance is to carry this on our prepaid US dollar Travel Money Card, which can be used just like plastic.”

Commenting on the high demand for US city breaks, Virgin Holidays Head of Product & Commercial Angus Bond said: “Virgin Holidays is seeing an increase in enquiries from customers seeking great deals on money-saving shopping trips in New York or Boston. With deals starting at just £719² for three nights this December, and some great offers for 2014 planned for our January sale, it’s a great time to bag a bargain.”

"For a full breakdown of price comparisons in London, Boston and New York, see the Christmas Shopping Guide tables in the accompanying document.

Departing on 9 December 2013, three nights in Boston with http://www.virginholidays.co.uk/""&gt;Virgin Holidays, including scheduled flights with Virgin Atlantic from London Heathrow to Boston and room only accommodation at the 4V The Colonnade starts from £719 per person.

Departing on 11 December 2013, three nights in New York with Virgin Holidays, including scheduled flights with Virgin Atlantic from London Heathrow to New York and room only accommodation at the 3V The Milford starts from £872 per person.

Departing on 5 December 2013, two nights in Boston and three nights in New York with Virgin Holidays, including scheduled flights with Virgin Atlantic from London Heathrow (into Boston; out of New York), internal flight in USA and room only accommodation at the 3V Courtyard by Marriott Downtown (Boston) and the 3V+ Hotel Beacon and Apartments (New York) starts from £999 per person." 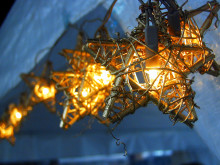