- Pump prices have fallen by up to 24p per litre year-on-year in European motoring holiday destinations(www.postoffice.co.uk/holidaymotoring2014)
- Biggest falls in France: 1,000 miles costs £45 less for unleaded, £47 less for diesel
- Fuel costs least in Andorra and Luxembourg – both sub £1 litre for diesel
- Diesel costs up to 27p per litre less than unleaded in Europe – but is 6p more in the UK

Lower prices in European petrol stations mean that UK tourists on Continental motoring holidays can expect their cars to drive more miles for less cash this year. Fuelled by the strong pound, pump prices have fallen in 20 of 22 countries surveyed for the eighth annual Post Office Travel Money Motoring on the Continent report¹.

The biggest fall in the cost of unleaded petrol and diesel fuel has been in France, where the litre price is down 23p for unleaded and 24p for diesel. France is one of nine countries² where local pump prices have also fallen year-on-year, helping to boost the benefit to UK drivers. A combination of cheaper fuel and the strong pound means UK tourists can expect to pay 15 per cent less for unleaded petrol (£1.26) and 18 per cent less for diesel (£1.08) at French pumps.

This means that 1,000 miles of motoring through France will cost £45 less than last year in a car using unleaded petrol (£191) and £47 less for diesel drivers (£163). Past Post Office reports have shown France to be one of the most expensive places to drive in Europe as well as being the country where most people have driven. New consumer research has revealed that 47 per cent of motorists who have driven abroad have done so in France³. This year’s price fall means diesel drivers will pay 29p a litre less in France than in the UK.

Prices are also down this year in two other European destinations popular with UK holiday motorists – Spain and Ireland. In Spain, where 38 per cent said they have driven, pump prices are down 6p a litre for unleaded (£1.18) and 5p for diesel fuel (£1.11). 3-in-10 motorists surveyed for the report had driven in Ireland, where a litre of unleaded petrol is 13p cheaper (£1.28).

For the third year running, the Post Office survey found that fuel is cheapest in Andorra –

£1.04 for unleaded petrol (down 8p) and only 94p for diesel (down 6p). By comparison, another eurozone destination, the Netherlands was 45 per cent more expensive for unleaded fuel (£1.51). Luxembourg was runner-up to Andorra and also offers a sub-£1 litre of diesel fuel (99p), while unleaded petrol is down 6p a litre to £1.11.

Although prices have dropped by 8p for both unleaded petrol and diesel, Norway once again emerged as the most expensive country in the survey. Drivers using unleaded petrol will fare worst with a litre price of £1.65 to pay: 61p or 59 per cent more than in Andorra.

Another Scandinavian country, Denmark, registered the only significant fuel price increase with 8p on the price of unleaded petrol (£1.49) and 7p extra to pay for diesel fuel (£1.31). Unleaded petrol prices also rose by 2p a litre in Croatia (£1.22) although the country has remained one of the cheapest of the 22 surveyed for both fuel types.

The Post Office report again picked up big differences between the cost of diesel and unleaded petrol in Europe. Motorists driving a diesel car will pay considerably less – up to 27p a litre – in almost all the countries surveyed than for unleaded petrol4. The only exceptions are Switzerland where diesel costs 4p a litre more (£1.21) than unleaded petrol (£1.17) and the UK, where diesel is also 6p a litre more expensive. At £1.37, the UK again emerged as one of the most expensive countries for diesel motoring.

Andrew Brown of Post Office Travel Money, said: “We advise holiday motorists to do their homework to establish the pump prices for petrol and diesel in countries where they will be driving. While it is great news that sterling’s strength is making fuel cheaper in Europe, motorists can save more money by planning their routes and fuel stops in advance.

“In France, especially, it will pay drivers crossing to French ports to fill up when they reach foreign soil because of the big drop in fuel prices there. However, they should change pounds into foreign currency before leaving home as UK ferry ports and ATMs abroad may offer poor rates. It is important for motorists to carry foreign money because plastic is not universally accepted in European stations and they may have to pay for fuel in cash. It can also help avoid problems if they are stopped by the police and given an on-the-spot fine.”

Currencies for the destinations surveyed are among 30 available on demand at 1,600 larger Post Office branches, while over 10,000 offer euro over the counter and 4,000 offer Turkish lira. More than 70 currencies can be pre-ordered at over 11,500 Post Office branches or online at postoffice.co.uk for next day branch or home delivery.

Drivers can compare fuel prices in Europe at www.postoffice.co.uk/holidaymotoring2014.

1 Fuel prices used throughout the Motoring on the Continent report were sourced from fuel-prices-europe.info and cross-checked with Europe’s Energy Portal (energy.eu). Local currency prices were converted to sterling using the prevailing Post Office exchange rate. Post Office Travel Money surveyed unleaded petrol and diesel prices per litre and the cost of motoring for 1,000 miles (based on 30 miles per gallon/4.55 litres), comparing 2014 prices with 2013. Data for both tables relates to exchange rates on 1 June 2014 and the cost per litre is to the nearest pence. Numbers in brackets refer to 2013 positions.

Best Value for Motoring on the Continent – Diesel price comparison

2 A Post Office comparison of local prices in 2013 and 2014 found that pump prices had fallen 10 per cent in France for unleaded petrol and 14 per cent for diesel. The other countries to show local pump prices falls are: Andorra, Austria, Germany, Greece, Ireland, Luxembourg, Portugal and Switzerland.

4 How much less motorists pay for diesel, compared with unleaded petrol

1 Fuel prices used throughout the Motoring on the Continent report were sourced from fuel-prices-europe.info and cross-checked with Europe’s Energy Portal (energy.eu). Local currency prices were converted to sterling using the prevailing Post Office exchange rate. Post Office Travel Money surveyed unleaded petrol and diesel prices per litre and the cost of motoring for 1,000 miles (based on 30 miles per gallon/4.55 litres), comparing 2014 prices with 2013. Data for both tables relates to exchange rates on 1 June 2014 and the cost per litre is to the nearest pence. Numbers in brackets refer to 2013 positions. 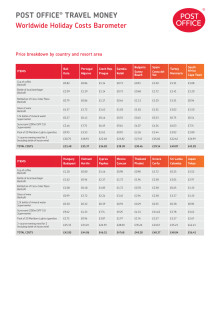 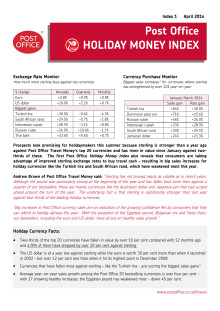 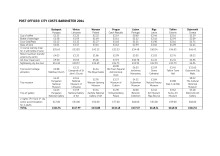