- Parents expect to spend £2291 on keeping their children amused over half term
- Week of woe: Nearly two thirds of parents (62 per cent) are worried about covering the costs
- A third (31 per cent) will dip into their savings and 22 per cent plan to work overtime to make up the shortfall

UK parents expect to spend an average of £229 entertaining their children this school half term and their savings look set to suffer as a result, according to the Post Office’s Half Term Spending Report.

As children across the UK look forward to the first break of the new school year, almost two thirds of their parents (62 per cent) are worried about how they will cover the costs of keeping them entertained.

Despite concerns about how to finance the week off, over a quarter (28 per cent) of families are planning to go abroad this half term, with a majority (88 per cent) of those concerned about how they will pay for it.

Earlier this year, the Post Office Summer Spending Report revealed parents expected to spend £7172 on entertaining their children during the six week break, which works out as an average of £119 per week, significantly less than £229 the half term holidays could set them back.

Whether they are heading on holiday or staying at home, eating out is expected to be the top expense for half term week, with almost a third (30 per cent) of parents placing it in their top three expected costs. Entry to tourist attractions (27 per cent) and filling up on petrol (25 per cent) also make up the top three highest spends.

Many parents will be cutting back on their own spending in order to fund half term, with takeaways (41 per cent) and new clothes (39 per cent) top of the list of sacrifices they expect to make. A quarter (23 per cent) will simply cut back on their day-to-day spending.

Some parents face more severe lifestyle choices in order to fund half term expenses.  Over a third (37 per cent) plan to take a ‘savings break’, while 31 per cent expect to dip into their savings pot. Meanwhile, over in five (22 per cent) plan to work overtime to make ends meet during this expensive week.

Henk Van Hulle, Head of Savings and Investments at Post Office comments: “With the long summer break only recently behind us, and Christmas already on the horizon, the Autumn half term break can come at an inconvenient time for UK parents.  Cutting back on non-essentials like takeaways is a good place to start, but it is worrying to see the number of people who will be dipping into their savings or working overtime to fund this time-off.

“All parents want to make sure their kids enjoy their holiday, but it’s important to budget for the extra expenditure to avoid feeling the sting later. However you choose to manage the half term spend, be it through savings or sacrifices, it is important to be realistic about what you can afford and be aware that options like credit cards and overdrafts may carry their own fees and end up costing you more. It’s advisable to put a small amount into savings each week or month so you’re prepared for family events and holidays such as these.”

1. Research conducted by Opinium on behalf of Post Office between 23 to 26 September. 2003 online interviews took place of which 666 with parents aged 18 or below.

Bank of Ireland has supported customers in the UK for many decades and is the exclusive financial services partner to the Post Office.  Bank of Ireland primarily operates in the UK through its wholly owned and separately incorporated subsidiary Bank of Ireland (UK) plc, which is authorised and regulated by the Financial Conduct Authority and the Prudential Regulation Authority.  Activities related to the Post Office partnership are conducted within this entity and as such, all retail deposits up to £85,000 with the Post Office are protected under the UK’s Financial Services Compensation Scheme.  At 31 December 2013, Bank of Ireland (UK) plc had a loan to deposit ratio of 86% with customer deposits of c. £21 billion utilised to fund customer lending of c. £18 billion (primarily comprising c. £13 billion of UK residential mortgages).

Parents To Splash Out Almost £500 Entertaining Kids This Summer

The UK - A Nation Of Well-Travelled Tots

- Attractive products include Online Saver, Reward Saver and Cash ISA - Products are available online, in-branch, by phone or by post 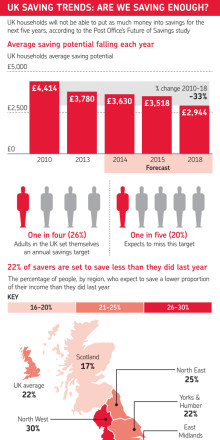